Note: Isabelle Khurshudyan graduated from the University of South Carolina in 2014 with a degree in journalism. As a student, she won numerous writing awards. In 2018, she was named one of the Outstanding Young Alumni of the School of Journalism and Mass Communications.

The following is reprinted with permission of The (Seneca) Journal.

But as a foreign correspondent for The Washington Post, Khurshudyan is firmly embedded in covering a war between Russia and Ukraine.

“I feel like this has been three years off my life,” she said Monday. “It feels like it’s been months of war coverage, when it’s really been 10 days.”

She spoke with The Journal earlier this week while under curfew in Odessa for an interview about what her life is like now. Khurshudyan lived in Oconee County for about six years, went to Walhalla Middle School and graduated as valedictorian from Walhalla High in 2010. She also had bylines in The Journal’s sports section as a freelancer from 2009-12. Her father, Art, is a developer and still lives in the area.

After graduating from the University of South Carolina’s journalism school in 2014, Khurshudyan interned at The Post for about four months before being hired on full-time to cover the National Hockey League’s Washington Capitals as a beat reporter. During her internship, she drew an unexpected opportunity in the newsroom when a commercial airplane was shot down while flying over eastern Ukraine in 2014. Being able to speak fluent Russian and translate conversations for breaking stories, Khurshudyan said she caught the attention of executive editor Martin Baron.

Over the next four years, she floated a proposal for being a foreign correspondent to higher-ups after getting hooked on the idea.

“I definitely knew it was what I wanted to do,” she said of the foreign correspondent role. “I always thought, ‘I’m going to be a sportswriter until I die.’”

In early 2018, Khurshudyan was given a month off her sports beat to work in Moscow as a correspondent.

“I think I did OK,” she said. “It’s really hard to go into a foreign country for a month and figure out what you’re doing.”

Sure enough, she was able to convince Baron and others to make her the foreign correspondent in Moscow in December 2019, right before COVID-19 gripped the globe.

“There was a lot in that first year that was hard and confusing,” Khurshudyan said. “You’re moving to a new place and the coronavirus means any dreams you have of travel and in-person reporting, it all of the sudden gets scuttled.”

After getting her bearings, Khurshudyan said she became much more comfortable and even interviewed Ukraine President Volodymyr Zelenskyy in August after Russian forces massed along the border in the spring.

The fog of war

In December, Khurshudyan took off to Ukraine and reported on the Donbas region, which borders Russia. She eventually made it back to Moscow before being pulled into Ukraine full-time on Jan. 23. Khurshudyan said her belongings are still in Russia and she is unsure if she’ll ever be able to go there again, something she’s struggled with.

“It is a hard thing to wrap my mind around,” she said. “I had a real life there. I have friends who live there — a lot of friends.”

She said there are “a lot of Russians” who want nothing to do with the current government, and some friends have left the country because the economy is cratering amid foreign sanctions.

Since January, Khurshudyan has been a de facto manager of sorts in working her own job while also making sure other journalists have bulletproof vests and a stable internet connection.

Exactly two weeks ago, Khurshudyan was in Kharkiv when the Russian invasion began.

“We were there when the invasion started,” she said. “Kharkiv got very crazy, and it was very dangerous. We had to retreat from there to Dnipro.”

She was most frightened before the shelling, Khurshudyan said.

“My entire body was shaking,” she said. “The worst feeling is this wait. Knowing something is coming — you don’t know what it’s going to look like — and the dread of not being able to do anything about it.”

Two days after she conducted an interview at an administration building in Kharkiv, Khurshudyan said a missile hit the exact spot.

Khurshudyan is driving a rental car to get around — and one experience she’ll never forget is driving out of Kharkiv amid the shelling.

“Depending on which direction you’re going, there’s a lot of refugee traffic of people going west and trying to get out of the country,” she said. “There’s a lot of military checkpoints now that never existed before, and you go through small towns and people have brought out barrels to block the road and want to look at your passport. … It’s a very weird experience every time because there’s a lot of dudes with guns just standing there and asking you questions, and you need to answer them correctly.”

As long as there’s war in Ukraine, Khurshudyan said she intends to cover it for The Post.

“I do think it’s going in a way that people weren’t expecting,” she said. “I think people thought Russia would just roll over the Ukrainians, and that hasn’t happened at all. I also don’t think Russia will give up until it accomplishes its ultimate aim of regime change.”

Khurshudyan said she feared Russia would grow more impatient the longer the war drags, which could trigger more indiscriminate bombing and civilian deaths.

“I do think they are going to keep pounding at it until they get what they want,” she said. “I think it’s already been too costly for Putin with the state of their economy, the sanctions and burden of this to be, ‘OK, clearly we lost, we give up.’ They haven’t lost — they’re slowly making gains. They have much more firepower and manpower.”

When asked why a conflict happening thousands of miles away is relevant to residents in Upstate South Carolina, Khurshudyan said, “if this can happen in the middle of Europe, it can happen anywhere.”

“It’s important to pay attention to this and support countries’ rights to choose to be democratic — that’s really the American ideal,” she said. “All Ukraine did to deserve this was it wanted its own democracy. It didn’t want to have a government that did everything Russia did.

“It wanted to go its own way. For that, there’s women and children fleeing across the border into Europe right now … and there’s men dying. There’s a lot of innocent people dying when Russians bombard their homes, even when they say they’re not doing that.”

For now, she’s stationed in Odessa — a large Black Sea port — waiting for the metaphorical next shoe to drop.

“It’s probably going to get bombarded in the next couple days,” she said earlier this week. “We’re just waiting for that here.”

The city also has a deeper meaning for Khurshudyan — it’s where her parents and grandparents were born. She recently saw her great-aunt for the first time in 24 years, she wrote in a Post column on Monday.

“Now that I’m finally here, I wish I wasn’t,” she wrote. “My fear is that I’ve come to Odessa just in time to witness the same destruction and bloodshed happen here.” 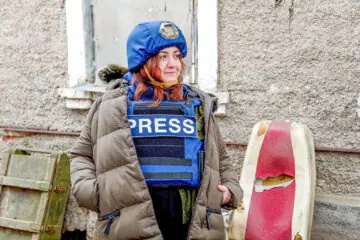 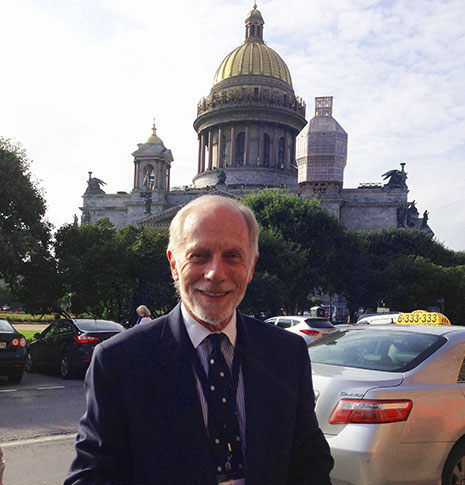 "I’ve been watching the war in Ukraine unfold, in no small measure, through the eyes of Isabelle Khurshudyan. Isabelle is a Moscow-based correspondent for the Washington Post and a 2014 alumna of our School of Journalism and Mass Communications."

Read "Isabelle and I"